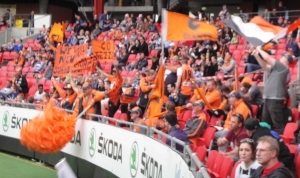 An AFL game in the States, can it be a reality?

Headlines were made in the AFL community recently when Greater Western Sydney CEO David Matthews spoke openly about the Giants potentially playing a match for premiership points in the United States. In comments made to The Age, Matthews admitted that he had been in related talks with both the AFL itself and Tourism Australia to see if such a game would be feasible.

"Our preference would be a premiership game,” Matthews stated. “That said, like a lot of clubs, we're in discussions with the AFL about their aspirations for AFLX."

"The USA is an attractive prospect based on their love of sport, connection to Australia and their status as a significant trading partner," said the AFL’s David Stevenson.

If a match were played in the USA, it would have to be in a large city such as Los Angeles, New York or Chicago. The obvious lack of American cricket ovals would likely be the biggest obstacle. As recently as 2006, the AFL staged a preseason match between Sydney and North Melbourne in LA (at the UCLA intramural sports field), but it drew lackluster numbers. Other American cities that have hosted AFL or VFL matches in the past include San Francisco, Portland and Miami.

There is certainly enough grassroots enthusiasm in the US for a footy match to be played, both among Americans in the USAFL and in the Aussie expat community. Even AFL legends such as former Essendon and GWS coach Kevin Sheedy have thrown their support behind the idea. In addition, the Australian ambassador to the US, Joe Hockey, has been a key patron of the USAFL for many years. With that being said, the logistical challenges would be great and the AFL might quickly soften on the concept if it isn’t done the right way.

The history of the AFL staging international matches has been mixed. Back in 2013, the St Kilda Football Club first pioneered the idea of taking premiership matches overseas -- specifically an Anzac Day match at Westpac Stadium in Wellington, New Zealand. The idea only lasted three years and was eventually put on hiatus due to dwindling crowd numbers and a lack of stadium availability. The Saints’ board hasn’t given up on its NZ dreams though, talking to officials in Auckland about potentially staging a game there as recently as 2016.

The more notable international match in recent seasons has come from Port Adelaide, which “hosts” the annual Shanghai clash. First played in 2017 against the Gold Coast Suns, Port has managed to get valuable exposure in China, one of the biggest markets for sports, but the games still haven’t always drawn the expected attendance figures, earning criticism from some corners of the Aussie media.

One positive that the USAFL can draw from the China experiment is that fact that AFL Asia has benefited from being able to host curtain-raiser matches before the Port game. If a game were to be played for premiership points on US soil, the USAFL would surely take advantage and attempt to organize a tournament accordingly. Similarly to China, the pleasant American summer weather would be a draw as well.

Again, the elephant in the room is the absence of quality cricket ovals. The only American oval recognized by the International Cricket Council is the Central Broward Regional Park (CBRP) in Fort Lauderdale, Florida. The USAFL used the complex for the 2015 49th Parallel Cup (the clash between the US and Canadian national teams) and it was purposely built to host cricket matches. With a capacity of 20,000, it could draw a quality crowd for, say, an AFL preseason match. Given that the AFL has proven somewhat cautious about international expansion in the past, a preseason game would be a good way to test the American waters. Many Aussie expats and US fans alike would be keen to make the trip to Florida to watch. However, flights from Australia itself would be dauntingly expensive and the AFL itself has implied that a West Coast-based game would be preferable.

Apart from the CBRP, most of the American ovals are either privately-owned and difficult to book, not large enough to support a crowd of thousands, lack high-quality turf, or all of the above. If the CBRP isn’t available, the best option would be to commission a baseball stadium or gridiron field and turn it into an AFL oval for one day.

New York could be an option, as they have both Gaelic fields and college intramural complexes that could be temporarily converted. Having lived in LA previously, I know that there’s no shortage of quality fields, but the ability to actually schedule a match there would be challenging. Stadiums such as the Rose Bowl and the LA Coliseum would probably be skeptical unless they could guarantee a solid crowd, and it’s highly unlikely that Dodger Stadium would allow anything non-baseball related to be played there over the summer.

One tantalizing option could be Hawai’i. Aloha Stadium, best known for hosting the NFL’s Pro Bowl, seats 50,000 people and is going to be redeveloped in the next few years. Flights would be much cheaper from Australia to Hawai’i (as opposed to the mainland US) and the local media would probably be enthusiastic about it. In addition, a game in Hawai’i could also serve as an opportunity to showcase AFL in the rugby-crazy Pacific.

Wherever the location is, I just hope that the AFL Commission gives the project its due diligence. A game staged in America could be a massive boon for the sport on both sides of the Pacific, but I just hope that the AFL is willing to listen and give full support. The bottom line is that there’s more than enough enthusiasm from all parties to make the event a success. We’ll just have to see where it goes.