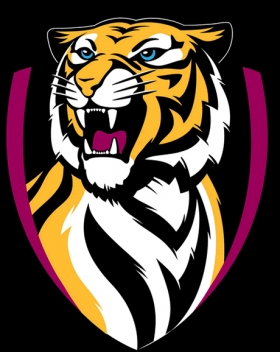 Pretty much under the radar a new Women's team has emerged just outside of Denver in Colorado, the Centennial Tigers. They have been established largely on the growth of their now neighbors the women's team in the Denver Bulldogs, and are looking to establish themselves as a competitive outfit very quickly in women's footy in the USA. The team formed way back in October 2019, lead by Denver player and board member Sara Rohner. They are the 46th member club of the USAFL.

To give you a roadmap perspective maybe, Centennial is about a 20-30 minute drive south of Denver, so not that far, and home to about 100,000 people. The Denver area has a population of around 2.8 million, which makes it the 28th most populous city in the USA. (Only 28th? I can hear some Aussie saying ;)

Recently they announced their first Head Coach, Destry Gillette. Destry played all of his footy career with the Denver Bulldogs up the road, debuting in 2000, and was a member of the Bulldogs when they strung together several Div 1 Premiership wins in the early 2000s. The appointment as Head Coach however will herald his first active return to the sport after a several knee surgeries.

This week Sara Rohner told USFootNews though the decision to break away from the Denver Bulldogs wasn't easy, the time and effort to continue with the club when you have to drive multiple hours in peak hour traffic just to practice, had some to do with it. Sara also reminded us this isn't the first time a club has split off to start a team and in fact in the early 2000s there was a split off from the Denver Bulldog men’s team in Colorado Springs, called the Rocky Mountain Saints. That split didn't last long but others have followed in recent years, the Minnesota Freeze women's team split off to form the North Star Blue Ox, also a standalone women's team, and on the men's teams two more recent splits were the Arizona Hawks to Arizona Outlaws and the DC Eagles amicable split to form the Baltimore Dockers to become their own team.

From their website, the Centennial Tigers have a clear message to their purpose.

The Centennial Tigers were established on a foundation of core values: Tenacity, Integrity, Grit, Empowerment, Respect and Sportsmanship (TIGERS). While winning is always fun, our main desire is to empower women of all ages through sport. We’ve witnessed transformations in countless women by helping improve fitness, building self confidence, and encouraging each woman to be herself.

Just recently the Centennial Tigers were recognized at the Colorado Women’s Sports Fund Association (CWSFA) grant banquet in Fort Collins. The Tigers received a $500 grant from the organization for their "dedication to growing women’s participation in Colorado sports".

Already numbering a solid group of players up to 30 in all Sara Rohner told us, from the areas of Centennial, Greenwood Village, Englewood, Littleton, Highlands Ranch, Lone Tree, Parker, Castle Rock and Elizabeth cities/towns, the Tigers look to stamp their mark on the USAFL's women's footy soon. There is a chance many will see them in action first at the Central Regionals in Dallas and then most definitely at the USAFL Western Regionals, which is across town virtually in the opposite direction from Denver, in Westminster CO.

You can read more about the Tigers and follow them on social media by visiting their website at https://centennialtigers.com 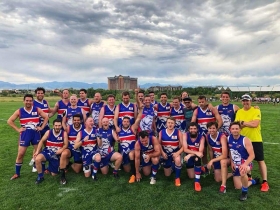 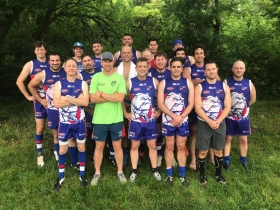 The Denver Bulldogs traveled up to Des Moines for the annual 80/35 10's tournament in Des Moines, Iowa. The say road trips build character, well this one in 4 mini vans, and 10 hours later, we are sure there was at least a load of good times. The games for the Bulldogs did not go to plan however. Missing several key players the Dogs went down in the first game to host club the Des Moines Roosters, who put on a powerful display. Later the Denver regained some composure to test the Chicago Swans to about a 4 goal difference, however fell short of a win this time.

Along with the men's team several women also traveled and took on the experienced Minnesota women and the newer Chicago women's team. Neither was the result they were hoping for, but experiences like these makes the difference and builds confidence for suture encounters.

Want read more, check out the full article on www.denverbulldogs.com