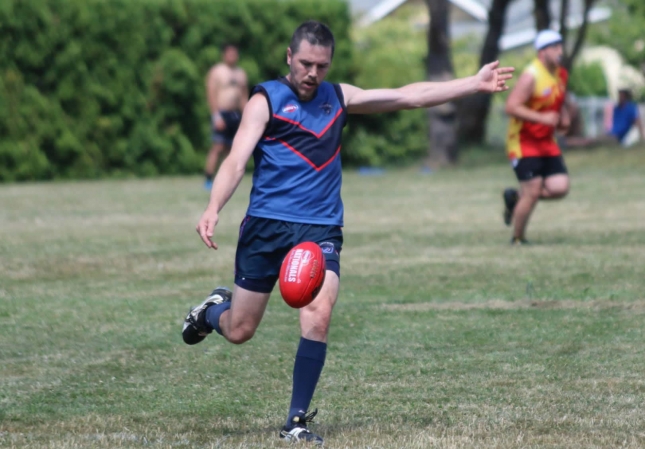 After growing up in Hobart the Capital city of Tasmania, Australia, in August 1997 Martin took up residence in Chapel Hill NC and so begun one of the most decorated footy careers of any USAFL player so far.  This isn’t just about 200 games at USAFL level, it is so much more.

Martin’s first game here in the US at the young age of 23 was with North Carolina when they took on the short lived South Carolina team at a clinic that was run at the time by an AFL legend himself, Paul Roos.  Roosey ran the clinic then umpired the game with players from Atlanta, SC & NC and Tri Cities TN playing. News is the Marto kicked a handy 6 goals in that game on his USAFL debut.

Martin played 5 years at the North Carolina Tigers, coaching for 4. He worked tirelessly on and off the field to help develop that club, before spending a year in Tucson AZ playing summer league footy with the Tucson Javelinas.

It was playing with the Tuscon/Mojave Desert Greens combined team at the Atlanta 2004 USAFL National Championships that Martin got chatting to Clay Atkins from Seattle who was also moving to Portland Oregon around the same time. In 2005 they would join forces with club founder Scott Johnson, who was trying to get the club off the ground. With only a handful of players they began building the foundation of the Portland club. In the early stages Coventry and Johnson both played with the Seattle Grizzlies who were also pretty new on the USAFL scene.

So let us get back to the start, what makes Martin one of the most decorated players in the USAFL history? Try this on, 15, yes 15 Best & Fairest (MVP) club player awards. Martin won 3 B&Fs at North Carolina and has won 12 at the Portl 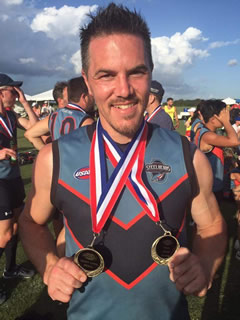 and Steelheads, including 11 of those in a B&F winning streak that could be the longest in the world. With 106 games now also for Portland, surely there must be an award with Martin’s name on it soon in Portland! He also has 3 Best at Nationals club awards to go with 3 USAFL Nationals B&F player awards.

Along with his amazing playing achievements and dedication, he has been VP of both NC Tigers and Portland “for a few years” (his words) as well as President twice of the Portland Steelheads. And we are not done there,  Martin also won the Paul O’Keefe Award for ‘Administrative Excellence' from the USAFL in 2010.

Success hasn’t been just his, Martin has played in seven USAFL Grand Finals at the National Championships with Portland & Seattle teams. His greatest day being Captain of the Portland 2016 Div 3 Championship team, winning the Div 3 B&F, and Div 3 Grand Final MVP all on the same weekend. Wow!

In 2013 women’s footy started up in Portland and Martin has grown to love the women’s footy development as well and been part of that success. Currently the Head Coach of the Portland women’s team and Assistant Coach of the Freedom, the USA National Women’s team, he continues to give back to the sport, ably assisted by his footy playing partner in crime Lauren Skonieczny.

“Over the years the thing that has changed the most is probably there are far more teams now. Back when I started there was barely a Div 2 at Nationals. Now we have 5 men’s and 2 women’s divisions.”  Martin told USfootyNews.  ‘ The standard is way better than ever before also and women’s footy continues to grow at a fantastic rate”, he went on to say.

Right now at the still young age of 44 Martin still enjoys being part of the team, out there on the wing, still able to keep up with the younger players and his involvement in women’s footy continues to drive his enthusiasm for the sport. “There is less pressure now on the field these days which is great, I don’t have to be the best player out there all the time, I can just enjoy myself” Martin offered also.

So what does he think is the best way to grown the sport from here on?  Martin replied  ‘ In Portland we have multi levels of the game now. We have non-contact games in the colder months using an indoor soccer arena. You can play tackle metro footy or USAFL footy. Introducing the game however at Social level or Ausball games, is so important. It Is where it all starts and players can play without having to worry about being bumped or tackled.  This is how to best grow the game, have multiple levels of the game, so anyone can play and learn the game.”

So 200 games is a massive milestone for any Aussie Rules player, however we think we all can agree Martin Coventry has had the career in the USA that is as unique as the game is itself. Congratulations Martin from USFootyNews and all your USAFL family!

Read 1213 times Last modified on Friday, 09 August 2019 18:18
Tagged under
More in this category: « Seth McElvaney an early pioneer still growing the sport
back to top